Inaugurated in 2013, the Wake Forest University Department of Sociology Community Engagement Award recognizes a graduating senior sociology major who embodies Wake Forest University’s Pro Humanitate motto and who has demonstrated an outstanding commitment to community service and leadership. The recipient of this award is recognized for their outstanding community engagement work at the campus-wide May awards ceremony that takes place during Commencement weekend.  The student’s name is placed on the department plaque which is displayed prominently in the Sociology Department.

The following are some of the factors the department considers in selecting the awardee: 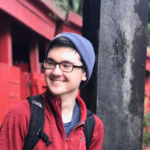 Cameron Steitz (’18) is a Sociology major with minors in Latin America Studies, Chemistry, and Environmental Studies. During his time at Wake Forest, Cameron served as a resident advisor, a sustainability ambassador, a student worker at the Pro Humanitate Institute and Campus Kitchen, a certified PEER Educator with a focus in mental health, and as a part of the Global Laureate Academy. He serves on the College Advisory Board for Winston-Salem and has worked in the nonprofit community, including research and volunteering with ABC of NC, a therapeutic and educational center for children with autism spectrum disorder. During his junior and senior years, Cameron helped organize Wake Forest’s participation in the annual SOA Convergence on the U.S.-Mexico border.  He also coordinated Wake Forest’s involvement in the Collegiate Alliance for Immigration Reform Conference at Harvard University and helped organize the first UndocWeek on campus.  His interests include social and environmental justice, immigration policy, and political sociology. He hopes to pursue a career in student affairs.